JAGUAR CLASSIC ATTENDED THE INAUGURAL 1000 MIGLIA EXPERIENCE IN THE UAE, WITH A 1950 JAGUAR XK120 FROM THE JAGUAR CLASSIC COLLECTION

Wednesday 21 December 2022, Coventry, UK: A rare XK120 from the Jaguar Classic Collection is now for sale from Jaguar Classic Works in Coventry, England, after successfully completing the inaugural 1000 Miglia Experience UAE. The 1950 Jaguar XK120 Open Two-Seater is offered as an approved Works Legend and finished in Cream with Black soft top and Biscuit and Red interior.

The immaculately restored example has been meticulously maintained since joining the Jaguar Classic Collection, and once belonged to Stuart Lightfoot, a founding member and Competitions Secretary of the Jaguar Drivers’ Club, formed in June 1956.

Experts at Jaguar Classic Works prepared the vehicle for the 1000 Miglia Experience UAE – the first time the iconic motoring event has been held outside of Italy – and Jaguar Classic supported the challenge as sponsor of the Official Awards Dinner at the Emirates Palace. The XK was driven by content creator and influencer Mohammad Al Muhaini (@Q8Stig) and Matthew Bailey, Senior Business Development Manager, Jaguar Land Rover Classic. This XK120 OTS finished 25/100 overall, and 13th in its class, and required no technical support throughout the competition which took place between the 4th and 8th December and began in Dubai.

As part of Jaguar Classic’s partnership with the 1000 Miglia Experience UAE, both Jaguar C-type and D-type Continuation models were displayed for the first time in the UAE including at the event’s awards ceremony.

Matthew Bailey, Senior Business Development Manager, Jaguar Land Rover Classic, said: “The Mille Miglia is an iconic race and it was a real privilege to take part in the inaugural 1000 Miglia Experience UAE with a beautiful vehicle prepared for the event by our experts at Jaguar Classic Works. The unique XK120 has a real pedigree and is now available to purchase through our Works Legends programme, and it promises to be a fantastic investment for one of our clients.”

The 1000 Miglia Experience UAE was open to 100 owners of landmark vehicles, including everything from historic vehicles, Mille Miglia racers and contemporary icons from the modern age. With four stages between Dubai and Abu Dhabi held between the 4th and 8th of December, the famous event was a new celebration of car culture for the region. The 1000 Miglia UAE is the largest classic motorsport event ever staged in the Middle East with participants experiencing an incredible drive through all seven Emirates.

The event was split into three categories; the 1000 Miglia Class (1927-1957), honouring the vehicles that took part in the original event; the Jubilee Class, for cars built up to 1971 (the founding year of the UAE); and the Contemporary Icons class, for modern vehicles.

In addition, British model and life-long Jaguar enthusiast, David Gandy, also participated in his own 1954 Jaguar XK120, which was renovated to a bespoke specification by Jaguar Classic in 2019. His distinctive XK120 underwent a 2,700-hour rebuild with unique upgrades to make it race-ready, with more power and enhanced durability from its 3.4-litre in-line six-cylinder engine. It is finished in Solid Black with Aged Saddle tan leather interior in a unique lattice design.

The Works Legends programme offers a distinct selection of exquisite, pre-owned classic vehicles, expertly sourced globally. Fully certified by Jaguar Classic, every vehicle is provided with a 12-month unlimited mileage warranty and a lifetime of history, comprehensively checked and prepared by the team at Jaguar Classic.

The 1950 XK120 for sale by Jaguar Classic is ready for other endurance rallies after its exploits at the Mille Miglia and is on the Registro – the official list of certified and accepted vehicles for the iconic race, with fees paid through 2023.

Sympathetic upgrades include the addition of a Brantz professional digital rally timer, a Bremont mechanical rally timer, four-point harnesses and a fire extinguisher. It also featured in Classic and Sports Car magazine’s 40th Anniversary Celebratory issue, in April 2022, where it appeared on the front cover.

The XK120 is one of a select few XK series cars available from Jaguar Classic, the global authority on these models, with the ability to service and restore vehicles using original archive drawings and techniques.

The XK120 was introduced at the 1948 London Motor Show and produced from 1948 to 1954. Around 200 examples were built with an aluminium body before being retooled to steel in 1950. Originally an open two-seater, fixed head and drophead coupe models also became available in 1952 and 1953 respectively.

An additional example of Jaguar Classic stock includes an exquisite ex-competition 1953 XK120, finished in Suede Green with matching Suede Green interior. This vehicle was originally owned by a keen rally driver, before changing hands and taking part in the XK Register racing series. Following four decades in storage, a full chassis-off restoration to FIA specification was completed and it is now ready to resume a competition career.

Our rapidly growing team of highly skilled engineers, graduates and apprentices at the Jaguar Land Rover Classic Works facility in Coventry specialises in outstanding restorations, and building exclusive New Original continuation cars, such as the Jaguar C-type and D-type.

All enquiries from prospective Jaguar Land Rover Classic customers should be directed to: info@classic.jaguar.co.uk / +44 (0) 203 601 1255 / www.jaguar.com/about-jaguar/jaguar-classic 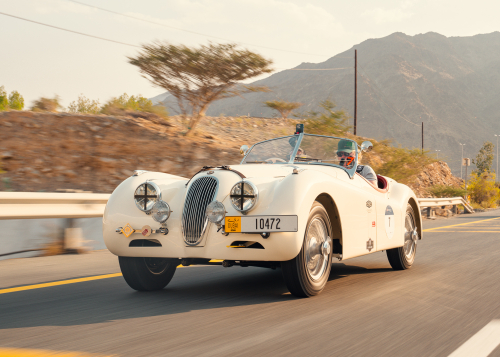 JAGUAR CLASSIC ATTENDED THE INAUGURAL 1000 MIGLIA EXPERIENCE IN THE UAE, WITH A 1950 JAGUAR XK120 FROM THE JAGUAR CLASSIC COLLECTION