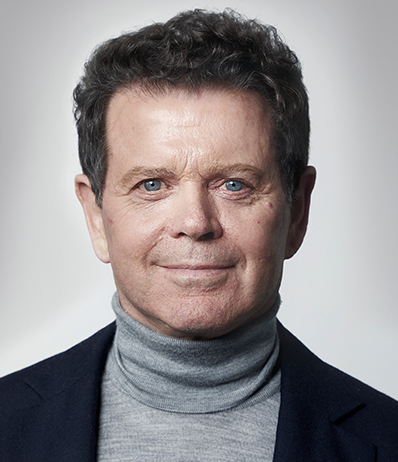 Professor Gerry McGovern lives by design as Chief Creative Officer for Jaguar Land Rover and a member of the Jaguar Land Rover Board of Management, he is convinced of the ability of design to transform business while enriching people’s lives.

Responsible for guiding and visioning the future of these two great British brands, McGovern is currently leading the team to develop opportunities to grow the business into new areas as well as developing the current portfolio of vehicles. As Chief Creative Officer McGovern’s wider remit is to guide all aspects of visual communications ensuring a consistent look and feel between vehicles and identity of the Jaguar and Land Rover brands.

It’s this approach that has been behind the creation of a new generation of Land Rover vehicles from the successful Range Rover Evoque to the highly acclaimed Range Rover Velar and the reimagined Land Rover Defender.

After completing a degree in industrial design at Coventry University, McGovern went on to study for a Masters at the Royal College of Art in London, specialising in automotive design. He began his career at Chrysler in the UK, followed by a stint in Detroit, before returning to the UK as a Senior Designer for Peugeot and later joining the Rover Group.

In October 2014 he was announced as a Visiting Professor at the prestigious Royal College of Art in London, demonstrating his commitment to design education. In 2016 McGovern was awarded Honorary Doctor of Arts by Coventry University. In 2020 McGovern was recognised as an Officer of the Order of the British Empire by Her Majesty The Queen.