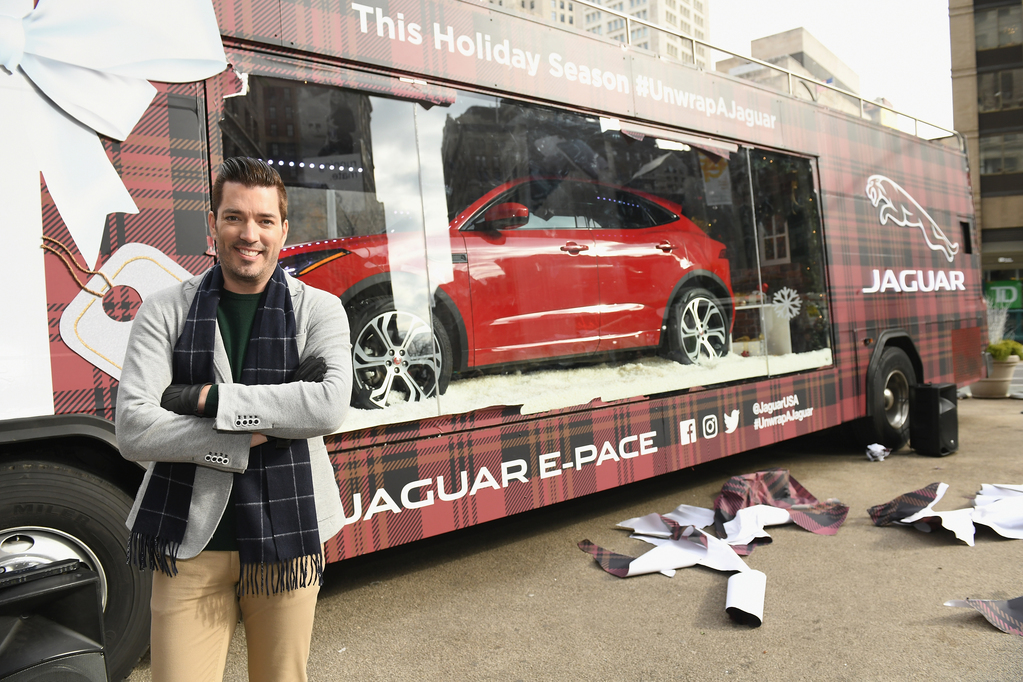 This holiday season Jaguar has partnered with HGTV’s Jonathan Scott from the long-running hit show Property Brothers to create the first ever #UnwrapAJaguar mobile holiday window featuring the Jaguar E-PACE. Designed by Scott, the first-of-its-kind display features the Jaguar E-PACE inside a carved out double decker bus, wrapped in a custom Jaguar wrapping paper.

This holiday season Jaguar has partnered with HGTV’s Jonathan Scott from the long-running hit show Property Brothers to create the first ever #UnwrapAJaguar mobile holiday window featuring the Jaguar E-PACE. Designed by Scott, the first-of-its-kind display features the Jaguar E-PACE inside a carved out double decker bus, wrapped in a custom Jaguar wrapping paper. The interior and exterior of the bus draw inspiration from classic holiday traditions.

To learn more, we spoke to Scott about the project, his plans for the holiday season and the best holiday gift he ever received from his brother Drew.

What attracted you to the Jaguar brand?
Going way back to when I was a child, my dad used to always talk about how his dream car was a Jaguar. One year he gave me a little model Jaguar, a convertible, and I thought it was the coolest thing. There has always been this sense of wonder about the brand since I was a child. I love the fact that Jaguar has this dedication to not only performance but to style, and I’m the same when I’m designing a place, I don’t compromise on style.

You’re also a skilled basketball player and a black belt in Karate, how would you see the Jaguar E-PACE fitting into your lifestyle?
Being a twin you’re always very competitive at everything you do and this was the case with Drew and I growing up, whether it was basketball or martial arts, we always competed. It was the same when it came to getting our first car, we always wanted to get something that was a little nicer than the other. Well, you can’t really out-do a Jaguar when it comes to the styling, but I’m also a dog dad, I have two puppies so I have to have an SUV to haul around the dogs and their stuff. For me the E-PACE is the perfect balance between style and functionality.

You’re also an actor, a magician and a musician. Who are your inspirations for your many creative endeavors?
Going way back when we were kids we watched movies with my dad. He was into old westerns and so Jimmy Stewart and John Wayne were always the actors we looked up to. As a magician David Copperfield was my everything. I thought he was just the coolest cat and I thought he had this sense of wonder. He could do anything, which was exciting for me. I’m actually friends with him now and just the other night I was sitting with him and thinking that if I could go back 35 years, I’m now sitting next to my hero. He’s just absolutely the most amazing creative mind you’ve ever met, a very, very cool guy. So that was pretty exciting. On the music side I just love classic timeless music. Frank Sinatra was huge for me, and even today somebody like Adele takes my breath away.

How does your family celebrate the holidays?
The holidays are all about family, and we always get together as a family no matter where we are. This year we’re all getting together at Drew and Linda’s new home, and we always deck the place out, we’ll have the Christmas trees and the garland and the lights and you name it. We’re not into tons and tons of gifts. What we usually do is one gift for each person and we especially love to give gifts in stockings. Those gifts are usually either handmade or something funny or bizarre. Oh, and there’s always a lot of food too.

How do you decorate your home for the holidays?
I go a little overboard with my place in Vegas. I have 26 foot ceilings in my main living room area so I have a 16 foot Christmas tree and also have wreathes throughout. I have a gigantic mistletoe that I had made, because I designed this custom chandelier with a steel orb around it and so I made the mistletoe to fit on that. I also have giant candelabras with garland on them. I have a total of about 150 feet of garland that goes all around my banisters. It’s a pretty big ordeal.

What’s your favorite holiday memory?
It would have to be caroling. We grew up on a ranch and one of the biggest traditions we have every year is we would go caroling to all the neighboring ranches and every stop we would make usually one or two people would join us and by the end there would be a group of about 20 to 25 of us singing. It was pretty fantastic and it’s memories like remain really special for me.

What’s the best holiday gift you ever received?
One year, and this is when Drew and I were first starting out in our business endeavors, I didn’t have a suit to look professional and wear to meetings. Drew didn’t know what suit I wanted, so he actually got 400 one dollar bills and he taped them all together into a suit. So it was a suit made of one dollar bills. That was his gift to me so I could go out and buy a suit. On the surface it was amazing and creative, but then it took me about four hours to pull all the tape off of each individual dollar bill, so that was pretty funny.

Please tell me about your philanthropic work with St. Jude’s Children’s Research Hospital, the St. Baldrick’s Foundation and Habitat for Humanity.
We’ve always been very involved in community and in charities that deal with cancer with children. Education and research have been very important. For one of our shows Property Brothers At Home on the Ranch, we had written some music and put it out for that show and one of the songs ended up Billboard charting, which we thought was pretty funny. So we thought lets do something different so we did a remake of the Flo Rida’s song ‘My House’ and all of the proceeds from that song went directly to St. Jude’s, which is an incredible place. The stuff they do is remarkable and no family ever pays a cent for any of the work they do to support the children.

The St. Baldrick’s Foundation is also a remarkable organization. We did a campaign to support them years ago. Cancer research has always been very important and some of our family and friends have been stricken with cancer, some have won the battle, while some have not.

This year we also continue our work with Habitat for Humanity, and we were named Habitat for Humanitarians, which is humbling for us. They’ve only ever given that distinction to four other people, Jimmy Carter and his wife Rosalynne, Garth Brooks and Tricia Yearwood. We’ve been very involved with Habitat for decades, not only donating to the Habitat ReStore but also working on some of their builds. We just did another campaign where we rallied a bunch of our friends in Hollywood and did a bunch of videos for Giving Tuesday and successfully raised over a million dollars.

The #UnwrapAJaguar mobile holiday window was unveiled on December 11, and can be seen as it drives throughout New York City until January 2nd.  One lucky winner will get the chance to unwrap their own Jaguar E-PACE this holiday season* by visiting www.jaguarusa.com/unwrapajaguar

*Enter Sweepstakes from December 11, 2018 through January 2, 2019. No purchase necessary. Open to legal residents of the 50 U.S. & D.C. 21 years and older with a valid driver’s license. To enter and for Official Rules, including odds, and prize description, visit www.jaguarusa.com/unwrapajaguar. Void where prohibited. Winner to be announced on or about January 16, 2019