The Edition 1988 name pays tribute to the racing success of the World Sports-Prototype Championship-winning XJR-9 in 1988.

Since its introduction in 2019, the Jaguar F-PACE SVR has established itself as a highly characterful and rewarding high-performance car. Pairing these qualities with a level of SV Bespoke personalisation and exclusivity never offered before on F-PACE makes Edition 1988 an even more captivating proposition. With strictly limited availability, we’re confident this will quickly become the most sought-after F-PACE SVR yet. 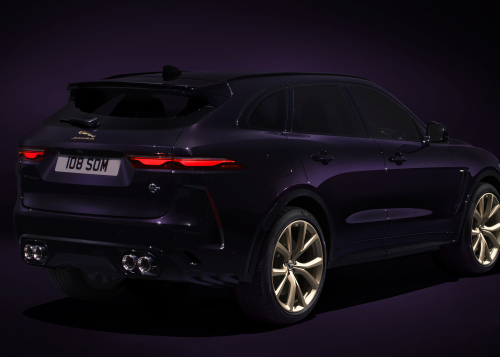 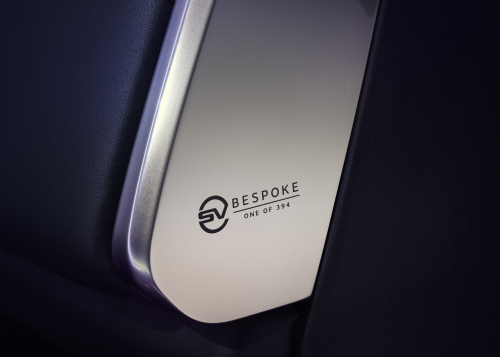 The design of the F-PACE SVR Edition 1988 is inspired by legendary Jaguar endurance racing cars. The Midnight Amethyst Gloss paintwork appears black until its amethyst undertones are revealed in bright sunshine, emphasising the SVR’s dynamic exterior. To achieve this dramatic Ultra Metallic Gloss finish, we assessed more than 40 variations to create the desired depth of colour.

Edition 1988 is also unique in featuring a Sunset Gold Satin Jaguar leaper and script on the tailgate. A laser-etched Edition 1988 logo is applied to each front wing panel.

In addition to the F-PACE SVR Black Pack components fitted as standard on Edition 1988, Gloss Black finishes are extended to the door mirror caps, brake calipers, wheel center caps and the letter R on the SVR badging.

The Jaguar leaper and horn ring on the steering wheel receive a Satin Black finish, while subtle SV Bespoke and Edition 1988 branding on the illuminated treadplates and dashboard, completes the package.

Edition 1988 started with our SV Bespoke and Jaguar Design teams taking inspiration from the iconic liveries of Jaguar’s race-winning sports cars. The result is a winning combination of colours, textures and features that celebrates sporting success while making the F-PACE SVR even more appealing.

The SVR Edition 1988 is the pinnacle of the F-PACE range. The new model is available to order now from Jaguar retailers worldwide, priced from $110,000(2) in the US. For details: www.jaguarusa.com/about-jaguar/special-vehicle-operations

1. Amazon, Alexa and all related logos are trademarks of Amazon.com, Inc. or its affiliates. Certain Alexa functionality is dependent on smart home technology. Use of Amazon Alexa requires an Amazon account.

4.  Driving while distracted can result in loss of vehicle control. Do not operate, adjust or view the navigation or multimedia systems under conditions that will affect your safety or the safety of others. Only use mobile phones, and other devices, even with voice commands, when it is safe to do so.

5. Do not use Jaguar Pivi Pro features under conditions that will affect your safety or safety of others. Driving while distracted can result in loss of vehicle control. Certain Pivi Pro features use an embedded SIM card, may require a data plan with separate terms and conditions, and an additional subscription after an initial term. Mobile connectivity cannot be guaranteed in all locations.  Please see your local authorized Jaguar Retailer for more details.

About Jaguar Land Rover: Reimagining the future of modern luxury by design

Jaguar Land Rover is reimagining the future of modern luxury by design through its distinct, British brands.

Our current model range embraces fully electric and mild-hybrid vehicles, as well as the latest gasoline engines. Jaguar and Land Rover vehicles are in demand around the world and in Fiscal 2020/21 we sold 439,588 vehicles in 127 countries. Land Rover is the global leader of luxury SUVs through its three families of Range Rover, Discovery and Defender. Jaguar is the first ever brand to offer a premium all-electric performance SUV, the Jaguar I-PACE.

At heart we are a British company, with two major design and engineering sites, three vehicle manufacturing facilities, an Engine Manufacturing Centre and a Battery Assembly Centre in the UK. We also have vehicle plants in China, Brazil, India, Austria and Slovakia. Three of our seven technology hubs are in the UK – Manchester, Warwick (NAIC) and London – with additional sites in Shannon, Ireland, Portland, USA, Budapest, Hungary and Shanghai, China.

Central to our Reimagine strategy is the electrification of both the Land Rover and Jaguar brands with two clear, distinct personalities. All Jaguar and Land Rover nameplates will be available in pure electric form by the end of the decade. This marks the start of the company’s journey to become a net zero carbon business across its supply chain, products and operations by 2039.

As a wholly owned subsidiary of Tata Motors since 2008, Jaguar Land Rover has unrivalled access to leading global players in technology and sustainability within the wider Tata Group.

Special Vehicle Operations includes a specialist team of designers, engineers and technicians dedicated to amplifying the performance and luxury attributes of SVR-branded Jaguars. That team works collaboratively with:

The XJR-9's Le Mans win was Jaguar's sixth of seven overall victories at the legendary 24 Hours endurance race in France, adding to its previous wins with the C-type and D-type sports cars in 1951, 1953, 1955, 1956 and 1957. The 1988 winner driven by Andy Wallace, Johnny Dumfries and Jan Lammers forms part of the Jaguar Heritage Trust collection today.

Jaguar’s successes also included securing World Sports-Prototype Championship titles in 1987, 1988 and 1991 – making this one of the most successful periods in its motorsport history.