A dynamic new Jaguar wagon was revealed today by world no. 1 tennis player Andy Murray. The two-time Wimbledon champion pulled the covers off the new Jaguar XF Sportbrake before placing his Wimbledon trophy inside and sending it on a UK-wide tour to inspire the next generation of players.

Jaguar is the Official Car Partner of The Wimbledon Championships and to celebrate the relationship, the premium wagon was revealed on a replica of the All England Lawn Tennis Club’s Center Court. The moment was streamed on Facebook Live and can be viewed here: https://www.facebook.com/Jaguar/

Winning my first major title ten years ago was an amazing moment for me; the culmination of everything I'd worked for my whole life. I feel very lucky to have got to where I am today and hope that anyone passionate about tennis gets the opportunity to play and improve.
Letting go of the trophy will be difficult, but there's no better vehicle than the Jaguar XF Sportbrake to take it on this UK tour. I'm pleased that people are going to be able to get up close to the trophy when it visits schools and tennis clubs, and hopefully it might encourage people to pick up a racket this Summer.

The XF Sportbrake joins the award-winning Jaguar XF sedan, now in its tenth year of production. The XF was launched in 2007 and has received almost 200 awards globally. The sedan’s new Sportbrake sibling delivers equally impressive performance, design and technology, with greater practicality and space.

Innovations include an intuitive gesture-controlled sunblind for the vehicle’s full-length panoramic sunroof, Driver Condition Monitoring designed to detect signs of driver-tiredness1 after an active day and a waterproof Activity Key drivers can wear while playing sports. Customers can also equip their XF Sportbrake with Cabin Air Ionization, which purifies air to provide protection against environmental pollution and promote health and wellbeing2.

The XF Sportbrake is available with the potent 380HP 3.0-liter supercharged V6 gasoline engine, which accelerates from 0-60mph in 5.3 seconds3.

After helping to introduce the XF Sportbrake, Andy Murray warmed up for Wimbledon with a light-hearted celebrity doubles match on a pop-up court. Murray and coach Jamie Delgado faced comedians Rob Brydon and Jimmy Carr in a contest streamed live online, with commentary provided by Tim Henman.

Jaguar is entering its third season as Official Car Partner to The Championships at Wimbledon, which runs from Monday, July 3 to Sunday, July 16. Jaguar will supply 170 vehicles from its award-winning range to the tournament, including the Jaguar XE, XF, XJ and F-PACE.

To help inspire the next generation of tennis talents, Jaguar is taking the famous men’s singles trophy on a nationwide tour of clubs and schools. As Andy Murray counts down to his opportunity to defend his Wimbledon title later this month, the iconic cup will be chauffeured between venues in a Jaguar XF Sportbrake.

(1) These features are not a substitute for driving safely with due care and attention and will not function under all circumstances, speeds, weather and road conditions, etc. Driver should not assume that these features will correct errors of judgment in driving. Please consult the owner's manual or your local authorized Jaguar  Retailer for more details.

(2) Dependent on the selected XF Sportbake vehicle trim and options

Jaguar is a premier manufacturer of luxury sedans, sports cars and SUVs offering unparalleled design with tremendous performance. The company's vision throughout its storied 80 year history has been simple: To produce beautiful, fast cars that are desired the world over. Jaguar strives to provide a world class ownership experience to every owner. Today's Jaguar lineup consists of the Jaguar XE and XF sports sedans, the XJ full-size luxury sedan, the two-seat F-TYPE sports car and the brand’s first-ever performance SUV, the F-PACE. Jaguar designs, engineers and manufactures exclusively in the United Kingdom, at the Castle Bromwich and Solihull manufacturing plants in the British Midlands. Jaguar is fully engaged with sustainability initiatives and social concerns with continuous involvement in environmental and community programs. For more information, visit the official Jaguar website at www.jaguarusa.com.

The company employs over 40,000 people globally, with 330 in the U.S. and supports around 275,000 more through our dealerships, suppliers and local businesses. Manufacturing is centered in the UK, with additional plants in China, Brazil, India and Slovakia.

At Jaguar Land Rover we are driven by a desire to create class-leading products that deliver great customer experiences. The largest investor in R&D in the UK manufacturing sector, we have invested £12 billion (USD$15.7 billion) in the last five years and in the current year alone will spend over £3.5 billion (USD$4.5 billion) on new product creation and capital expenditure. Last year Jaguar Land Rover sold over 583,000 vehicles in 136 countries, with nearly 80 percent of our vehicles produced in the UK being sold abroad. 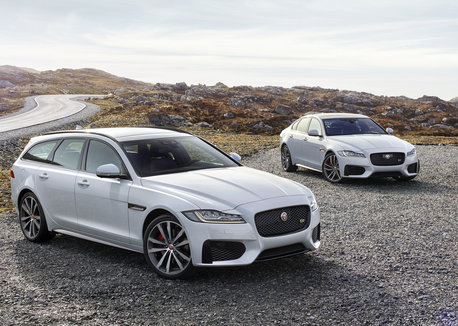 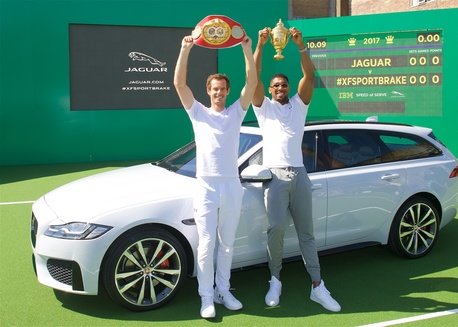 Following the reveal of Jaguar’s new XF Sportbrake, world tennis number one, Andy Murray and International Boxing Federation Heavyweight World Champion, Anthony Joshua MBE take each other on in a light-hearted tennis match on a pop-up court in London.