Proudly wearing their Invictus I AM t-shirts, 12 Jaguar Land Rover North America, LLC employees will be heading to Orlando, Florida on Saturday May 7, to volunteer their services for the Invictus Games Orlando 2016 held at the ESPN Wide World of Sports Complex.

Proudly wearing their Invictus I AM t-shirts, 12 Jaguar Land Rover North America, LLC employees will be heading to Orlando, Florida on Saturday May 7, to volunteer their services for the Invictus Games Orlando 2016 held at the ESPN Wide World of Sports Complex.

The volunteers will be spending six days ensuring everything runs smoothly for the 115 members of the U.S. Invictus team, sponsored by Jaguar Land Rover North America, competing in the multi-sport event for Wounded, Ill and Injured Service Members. Here they talk about why they wanted to volunteer for the Games and what it means to them personally.

“The Invictus Games is a cause I have a very strong personal connection to,” says Nick Englisis, Accounting Analyst at JLRNA HQ in Mahwah. “My grandfather was a Purple Heart recipient for his efforts on the beaches of Normandy during World War II, and it is an honor to represent both Jaguar Land Rover and my grandfather at the Games.”

Ed Moran, Atlanta-based Regional Vice President explains that his family has a long military history with relatives having served in World War I and II, the Korean War, and Vietnam. His oldest son is currently 1st Lieutenant in the Explosive Ordnance Disposal 4th Brigade of the 25th Infantry Division based in Anchorage, Alaska.

“Several of my son’s Army fraternity brothers and best friends are currently serving in the Middle East, so I welcome the opportunity to support those brave men and women who have literally put their lives on the line for our freedom,” says Ed.

“It is such an honor for me to be able to support the Invictus Games and help these veteran families have a great experience in Orlando. I’m also extremely proud that our company is linked to such a worthy cause.” 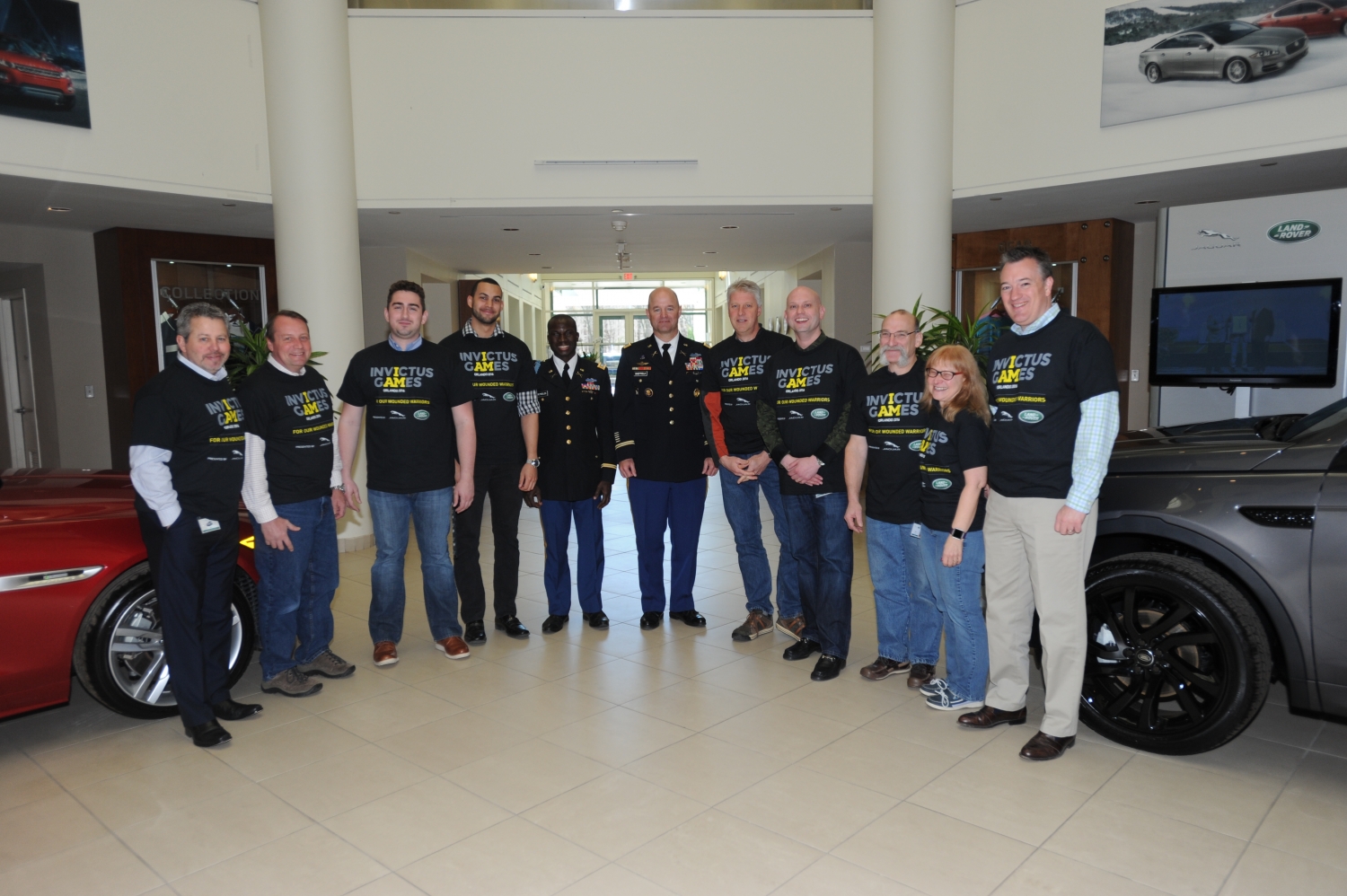 Stephen Sabo, Jaguar Land Rover North America Western Region Market Manager, says that being able to volunteer at the Games will allow him to show his respect, support and appreciation for what the service men and women competing in the Games have sacrificed.

“As an athlete and passionate supporter of our service men and women, I am moved by these wounded warrior athletes. I am especially inspired by their will to endure the adversity that most of us cannot imagine. I am humbled by their dedication and spirit to rebuild their lives, find new challenges and compete after such terrible and life-changing injuries. The least I can do is give my time and support to these remarkable individuals,” adds Stephen.

Tom Fleming, a retail relations specialist at Mahwah says the ability to give back and work alongside the people who put their lives on the line for our country is truly inspiring, and for him, a real honor. “My father is former Army and for me to have the chance to volunteer at the Games will make him very proud.”

During the Games, which run from May 8-12, the 12 volunteers will be providing guidance around the property, ensuring guests have an enjoyable experience and assisting with various activities and hospitality.

“We are so proud to have 12 of our employees dedicate their time to volunteer and represent Jaguar Land Rover at the Invictus Games,” says Prudence Medford, Vice President, Human Resources, Jaguar Land Rover North America, LLC. “We would like to thank them for their commitment to the Games and wish them and all the Invictus players the best of luck.”