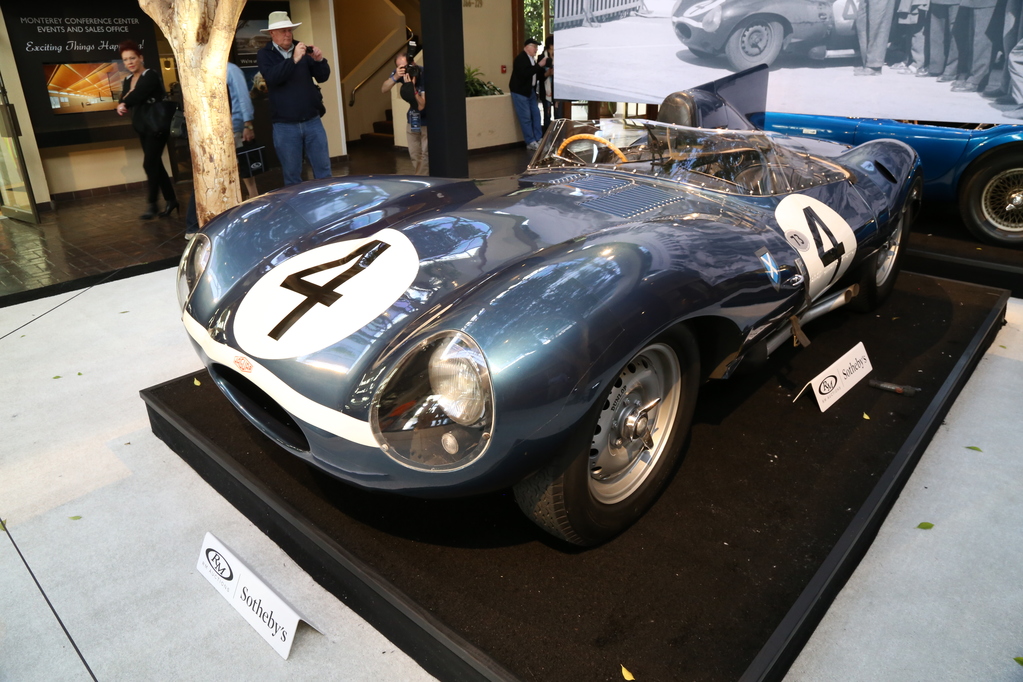 The legendary Jaguar D-Type that won at Le Mans in 1956 sold at the RM Sotheby’s auction in California last week for a remarkable $21.8 million. Mike Cook, Jaguar Land Rover North America historian and archivist says it was worth every penny.

It is, but not for a car with this kind of provenance. This is a very, very special car. It won the 24 Hours of Le Mans in 1956 for the Scottish privateer team, Ecurie Ecosse, and was retired one year later. This D-Type (Chassis number XKD 501)   has had only three private owners who meticulously maintained the car and worked hard to maintain its spectacular originality. While the $19.8 million it sold for - $21.7 million with auction fees - makes it the most expensive British automobile ever sold at public auction.

What makes this D-Type so special?

Definitely its the sensational performance at Le Mans in 1956. While Jaguar had entered three factory D-Type vehicles, two were eliminated in an early accident, while the third car driven by Mike Hawthorn, who’d won in a D-Type the previous year, was quickly in the pits with an engine  misfire. It was left to XKD 501 - driven by Scotsmen Ron Flockhart and Ninian Sanderson - to defend Jaguar’s honor. What a thrilling race it turned out to be as XKD 501 battled with the factory Aston Martin DB3S of Stirling Moss and Peter Collins in absolutely atrocious weather. Lap after lap the two cars would swap positions for the lead, but after 24 grueling hours, with only 14 cars left in the race, the D-Type crossed the line in first place. It had completed 2,507 miles at an average speed of 104.47mph. It was a remarkable victory.

What happened to the car after its Le Mans victory?

It essentially ended its active racing career in July 1957 and was retained by Scottish shipping tycoon and Ecurie Ecosse benefactor Major Edward Thomson. In 1970, Scottish businessman Sir Michael Nairn purchased XKD 501 and set about having it restored by the best D-Type specialists available. Then in 1999, it was bought by a notable American collector, who again invested heavily in keeping the car mechanically perfect. It was certainly one of the star cars at the 2002 Pebble Beach Concours d’Elegance.

We hear the auction turned out to be a real bidding contest, can you tell us more?

There had been a tremendous amount of pre-auction excitement surrounding this car, so when it drove out on to the stage at the Portola Hotel in Monterey last Friday, there was huge applause. The crowd knew they’d be in for some excitement when the bidding immediately started at $10 million and quickly shot up to $15 million. Then $16 million and on to $17 million. The crowd applauded again when, at $18.6 million a new bidder joined the fray. After 15 minutes, and bidding by just four collectors, the hammer dropped at $19.8 million. I think it was worth every penny.

How much of an appreciating asset are Jaguar D-Type vehicles these days?

XKD 501 has proved to be the best. When it was last sold at auction - by Christies in London in November 1999 - it went for £1.706 million. That’s roughly $2.74 million at 1999 exchange rates. Seventeen years later the same car sold for $21.8 million. That was quite the appreciating asset. Other recent D-Type sales include the 1955 car originally bought by Finnish Davis Cup tennis player Curt Lincoln. That sold in 2013 for $3.9 million. A 1956 car also owned and raced by Ecurie Ecosse sold at auction in 2013 for $4.24 million. With only 54 D-Type vehicles ever built, I’m sure there is only one way they will go in value. That’s up.